Call of the West 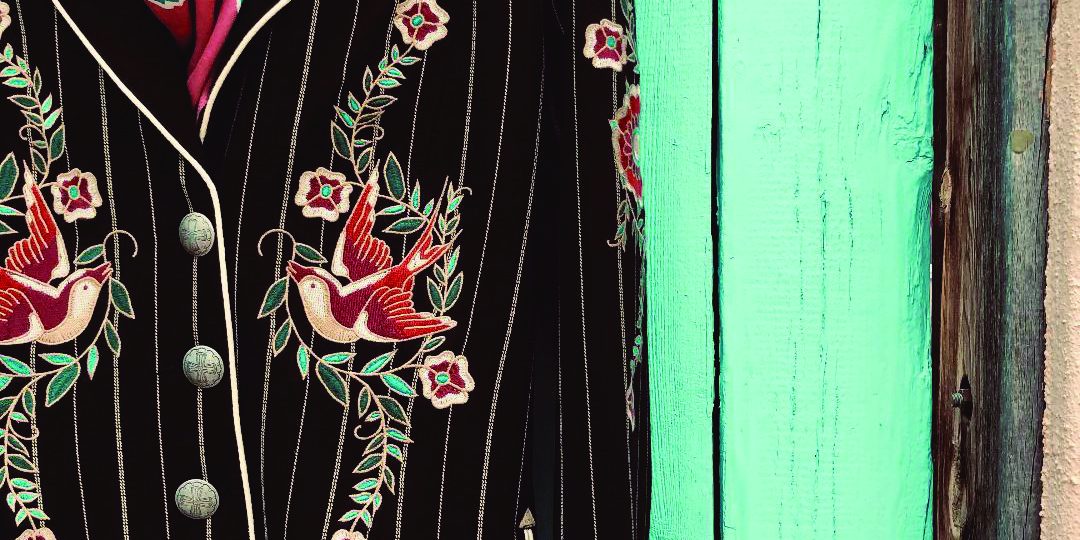 Story and Photos by Melissa McBride

My passion for fabrics, design, and collecting interesting notions was ignited at an early age. Years worth of gathered fabric remnants were stacked in my grandparents’ attic where my sweet grandma, Ada Mae, had a sewing area. I was about five when she taught me to sew on a very vintage Singer treadle machine. Once a supervisor at a dress factory, she was an excellent seamstress. I would watch and learn with my childlike wonder as she skillfully cut and pieced selective shapes together to make quilts, effortlessly constructed a dress or an apron (it seemed she was always wearing an apron), or patiently crocheted a colorful afghan. These invaluable experiences gave me an appreciation for all things handmade. I was surrounded by supplies. Decorative buttons and beads dazzled through glass jars in baskets and boxes. She had a treasury of lace, ric rac, yarn, and embroidery threads. Ideas continually danced in my head, my eye for detail and embellishment blossomed, and I seemed to be always making something. This beloved attic space was my first creative playground.

Santa Fe, “The City Different”, is a cultural blend of Native America, Old Spain, and the Wild West.  Its visual charm, breathtaking topography, and diverse personality tug at my heart and creative spirit. It is also my current inspirational playground of talented craftspeople and artists and I wanted to return to “play” with a few of the best of the west to develop a collection of accessories. 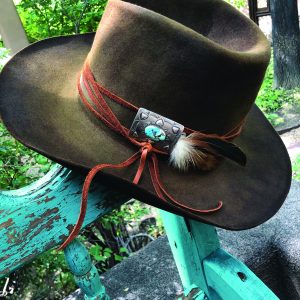 With a head full of design ideas and way too many bags (I still don’t have that “pack light” travel thing down), I left Dallas (late of course) playing “Amarillo by Morning”. I drove across the Lone Star State to complete Part Two of last issue’s story. Goodnight, Texas (population around 25), is the approximate halfway point between Dallas and Santa Fe, but Amarillo is “close enough” and obviously a much more viable stopover. Bonus…Taco Villa! It’s worth driving five hours for their bean burrito with green sauce accompanied by heart shaped tortilla chips and salsa. Yes…artfully heart-shaped chips! I arrived after midnight at humble accommodations. By January, weary travelers visiting or passing through the town that’s “halfway to anywhere” will have a new luxurious oasis…a boutique hotel experience awaiting at The Barfield.

Between Amarillo and Santa Fe there’s just a whole lot of wide open spaces. At this point, I’m singing along and owning the lyrics…”a girl who left home…struck out to find a dream and a life of her own”. For me…it most definitely “takes the shape of a place out west”! The line “her dad yells, ‘check the oil’”…brings back my own father’s concerns as I drove away to college in my first car…a Ford Maverick. Y’all…it was blue.  It was bad.  It had reflective vinyl racing stripes.  It was nicknamed “The Bad Mav”. Definition of maverick:  “An unorthodox or independent minded person. An unbranded calf or yearling”. I think I just liked the name. Obviously Ford likes it enough to recycle it, because a newly designed Maverick light weight truck unveiling is in the near future. A short detour off the highway to drive the Mother Road, Route 66, through kitschy Tucumcari, is a visual feast of Americana and neon. The Blue Sparrow Inn’s beautifully restored sign is about the same shade as my first vehicle. 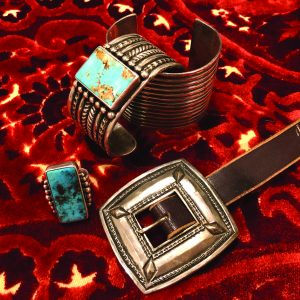 Driving and dreaming up hats, bands, buckles, bangles and bolos.  Purses, pendants, & rings to offer my most stylish customers. The goal of the Santa Fe road trip is to work shoulder to shoulder with my artist friends to craft accessories that will compliment some of my favorite clothing lines. There’s so much talent out there in apparel design, but one Texas company in particular stands out. I admire Double D Ranch because I appreciate intricate details. Contrast stitching, nail heads, leather lacing, embroidery, specialty buttons, conchos, beading, artfully embellished fabrics & leathers are their signature. I enjoyed perusing through four fall collections in their Dallas showroom. They perfectly align with my own favored colors (kiwi, terra cotta, turquoise, rust, espresso, and black), patterns (cheetah, serape, paisley, and southwest graphics), textures (chambray, leather, fringe, velvet, silver studding), and shapes (suiting, marble snap shirts, prairie skirts) which I feel will all remain strong in wardrobing for the remainder of the year. This is DDR’s 30th anniversary and I thought it fitting to celebrate their ongoing success by including a handful of their pieces in my photographs. Ironically, I purchased my first Double D jacket in a shop on the Santa Fe plaza about twenty years ago. I was “rockstar cool” as I walked out wearing their original cheetah jacket with dramatic twisted fringe. 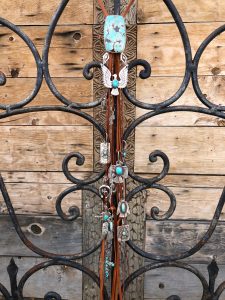 I lived in the suburbs of Chicago for about sixteen years, but my heart always yearned to be back in Texas. I remember spotting the first issue of Cowboys and Indians magazine around ’92. Standing in line at the grocery store checkout wearing my cowboy boots & feeling like a lost maverick, I lovingly held those tangible glossy pages representing “the American West”.  I anticipated every new issue and eventually I started noticing Double D’s clothing & home goods. At a crossroads in life, I reached out to see if there was a job opportunity.  I had owned three consecutive store front locations which were stocked with my creations…my art, custom apparel and accessories. I didn’t even know where Yoakum was, but by golly I would have moved there to get back to Texas. After speaking with someone over the phone who politely told me they weren’t hiring outside designers, I quickly concluded that DDR stands for “Doug & Daughters”. It was a tightly knit “family affair” blessed with the talent, grit, and grace of the three McMullen sisters and their parents, Doug and Margie. Fast forward years later to 2008, when I opened Gunslinger in Bandera, Texas, I immediately started selling DDR. In 2010, I ordered the updated 20th Anniversary version of the cheetah twisted fringe jacket because I had practically worn out the original. They just released a 30 year commemorative version (love the new yoke!) in the Cody collection.

Catch up on their blogs and all the fun they’ve had designing for Tanya Tucker this year. One of the key pieces for this shoot is the “Man in Black” embroidered suit. Tanya wore a more lavishly beaded version as she sang “Bring My Flowers Now”…just before she won her first two Grammys. The teenager in me who drove “The Bad Mav” applauds her overdue accomplishments. I embrace the happy memories of my best friend and I driving around town with “TNT” in the 8-track tape deck belting out “Brown Eyed Handsome Man”.

The past couple of weeks have again offered invaluable experience with me watching, learning, and reliving that childlike wonder. Co-creating and surrounded by stacks of all types and shades of leather, industrial machines, hand dyed hats, jewelry supplies and findings, turquoise and other natural stones, and the well-loved tools of both a master leather and silversmith.  Thanks for riding and singing along on this adventure! Enjoy my New West collaboration and have a fashionable fall! 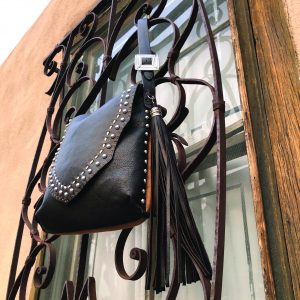 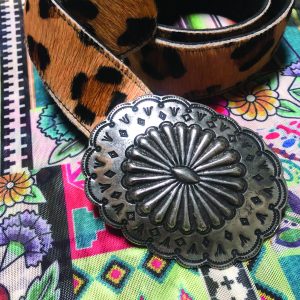 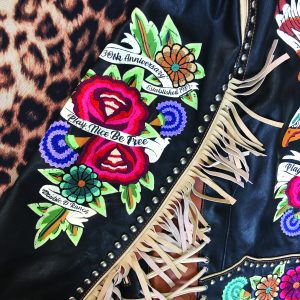 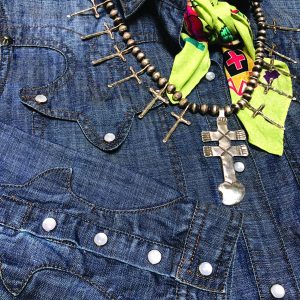 Turn your stockings into a spa day
November 2022

Caffeine in Skincare: is it the real deal?
October 2022