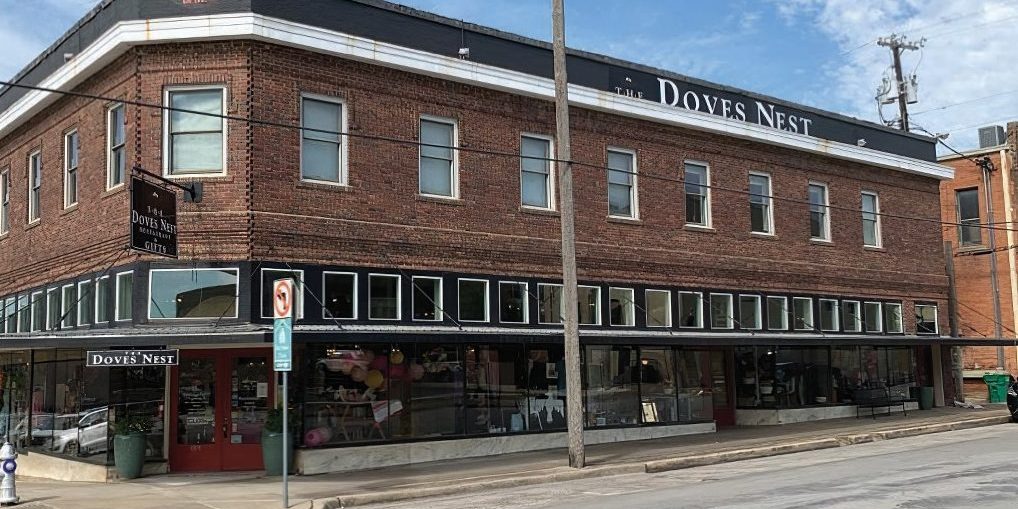 I have shared our story many times over the years, but as we celebrate the 25th year of owning the Doves Nest, I find myself reflecting on our incredible journey.

My mom, Marilyn Goss, had a popular little shop next door to the Ellis County Museum, where she had sold her artwork and gifts for several years, when in 1992 my husband and I opened a little restaurant in the back of her store. We had a tiny kitchen with household appliances and found our tables were quickly filled everyday with customers that loved our lunches and many more waiting to be seated. We began preparing as much food as possible each morning with a sweet little lady who would tirelessly appear to bake homemade pies, cakes and cobblers. Wondering if we had taken on too much of a task, each month was beginning to get easier when one afternoon two ladies walked in and made us an offer that would ultimately change our lives.

Built in 1913, the ladies had purchased the Moore Hardware store building one block south of the square. They opened a tea room alongside one of the first antique mall concepts in the area.

Sadly, after a couple of years their partnership soured and they no longer wanted to be in business together. They asked us if we might be interested in buying their building. We certainly needed more space, but as a newly married couple we hadn’t yet bought our first home, much less a commercial property. We graciously thanked the ladies, but declined their offer. The next day one of their husbands came in asking if he were to co-sign a bank loan would we reconsider the offer. By the third day we found ourselves the new owners of a 12,000 square foot historic building. When I think back on the transaction it’s overwhelming. We didn’t even know this man. He was just trying to end a bad situation for his wife, but for us it was a blessed beginning.

The next few months were spent renovating the space that once housed the saddle and tack portion of the hardware store and what is still to this day the Doves Nest Restaurant. Twenty five years later the hand painted artwork on the ochre walls and the black and white tile floors is still the same. We went from serving about 30 people per day to feeding over 100 hungry mouths six days a week.

Over the years we have had many famous people dine with us, but our favorite patrons are the ones who have raised their children on our chicken apricot salad and who are now bringing their own children, three g nerations later, to experience the Doves Nest.

In the spring of 1998, we renovated the second floor loft and built a home that we have enjoyed and currently share with our Rottweiler, Elsa. Living above our business has made for an easy commute to work and Elsa even comes downstairs with me each day to help in my office.

Along the way we have catered countless weddings, anniversaries, rehearsal dinners and corporate events. Our award winning cookbook is now in its fifth printing, having sold over 40,000 copies and winning the National Writers Digest grand prize award for self- published books. We have been written up in numerous publications and received the highest accolades in the Dallas Morning News, coined the phrase, “It’s Worth Flying South” in the Fort Worth Star Telegram, and been voted by Texas Monthly Magazine as one of the top ten best small town restaurants in the state.

I think what has made our business unique is the combination of our restaurant as well as our store, which has blossomed from predominately antiques into home accents, clothing, gifts and gourmet food items. It has made the Doves Nest a destination for tourists and a beloved experience for locals.

“I love buying and decorating the store each season, but would never be able to do it without the help of incredibly talented and loyal ladies, most of whom have worked with us for many years.”

It’s hard to believe that two Dallas city kids have been so blessed to not only have a business in Waxahachie for a quarter of a century, but to be a part of a wonderful community with such special people. We have so many memories and so much to be thankful for. You just never know what opportunities might come your way when you least expect it.