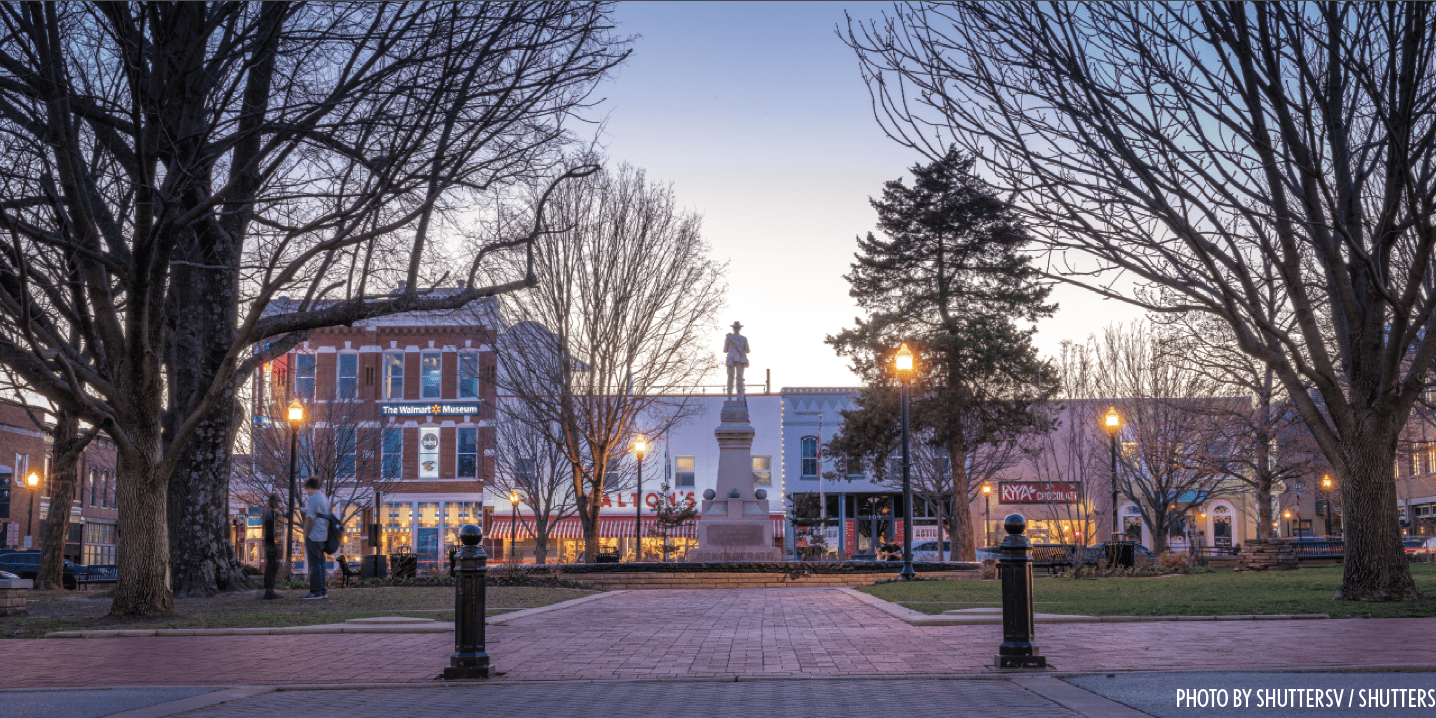 I’ve had Bentonville, Arkansas on my radar for several years and finally had the pleasure of experiencing its charm last month when I joined my mother in-law and two girlfriends for a quick weekend getaway. After a short flight to the Northwest Arkansas Regional Airport, we were in Bentonville’s historic downtown within minutes. Just two decades ago this sleepy town in the foothills of the Ozarks was primarily known as the corporate headquarters for Walmart – that was until 2011 when Walmart’s heiress, Alice Walton, unveiled the Crystal Bridges Museum of American Art. It was the biggest art museum opening America had seen in 40 years, launching Bentonville into the cultural spotlight overnight.

As we arrived at Crystal Bridges you can’t help but be awed by the spectacular structure architect Moshe Safdie designed. Set among 120 acres of forest is a series of gently curving pavilions nestled around two spring-fed ponds. The grounds are as impressive as the art itself with numerous hiking trails and outside art installations like the colorful Chihuly glass floating in the water. Once inside we enjoyed seeing the permanent collection of American art masterworks such as John Singer Sargent, Norman Rockwell, James Turrell, Georgia O’Keeffe, and Andy Warhol. We also walked the short trail into the forest to see the reconstructed Frank Lloyd Wright Bachman-Wilson House that was relocated from the flood-prone Millstone River area in New Jersey. With the finest collection that money can buy and free to the public, Crystal Bridges has pulled in more than 1 million visitors and has an exceptional interactive children’s museum next door called the Amazeum.

At first glance Bentonville feels a bit like Waxahachie with its pretty town square, colorful historic homes and numerous boutiques and restaurants. However, as we drove around the downtown area you can’t help but notice construction everywhere. It’s hard to miss the impressive, gated communities guarding huge homes on both sides of Bentonville’s two-lane farm roads, making it the fastest growing city in the state with three Fortune 500 companies now calling this charming place their home—Walmart, Tyson Foods, and J.B. Hunt. The area is also a big attraction for mountain bike enthusiasts with over 300 miles of dirt trails. 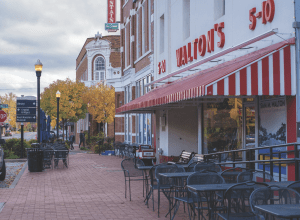 Anchored on the town square is Sam Walton’s Five and Dime he opened in 1951. The original store is now a small museum with his iconic1979 red and white pickup truck sitting out front. As we strolled through downtown, we noticed children playing at a large splash pad which I was told converts into an ice rink during the winter months. Next door sits the new 21c Museum Hotel with its own collection of contemporary art on display throughout the property. The restaurant on site is called The Hive where James Beard Award finalist Matthew McClure prepares what he calls High-South cuisine. Around the corner you can find a hip Onyx Coffee Lab as well as cool cocktails and salads at the Pressroom. In addition, 8th Street Market is a trendy new downtown food hub with numerous eateries and shops. Popular options for dinner can be found at The Preachers Son, set in the former First Christian church downtown. Chef Matt Copper, son of a Methodist preacher, partners with the area’s farmers, creameries, and orchards to bring in the highest quality ingredients. Chez Panisse alum and Arkansas native Luke Wetzel is the chef and co-owner at Oven & Tap, a great place for pizza baked in their wood-fired ovens.

With Walmart’s new 350-acre campus under construction and a cool communal work space across from City Hall, the new shape Bentonville is taking might look foreign to its long-time residents, but it’s becoming extremely eye catching to the urban Millennials it’s designed to attract. For now, it remains a nice blend of historic small town and a trend setting collection of 21st century corporate culture that is certainly worth experiencing.