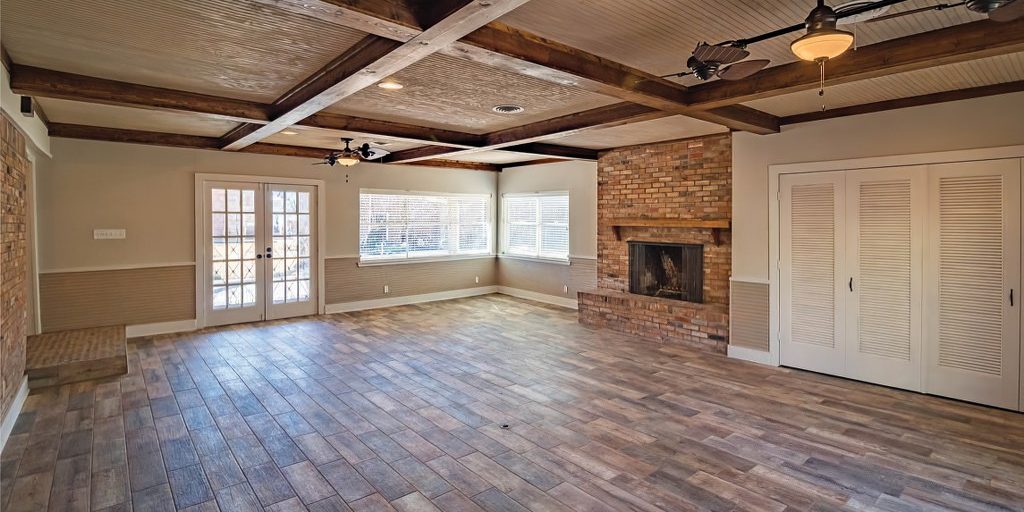 A typical room addition in the 60’s was sure to be finished out with sheets of pre-finished paneling and ceiling tiles. It was fast, inexpensive and stylish for the time.

However, the years are often not kind to these quick-fix rooms. The paneling starts to buckle and roll on the walls. The ceiling tiles turn yellow and often break loose, as they are merely stapled together.

“Yes, It was a way for “do it yourselfers” in the 60’s to gain space quickly, but the quality was lacking. For the last thirty plus years remodelers have been tearing these rooms down to the bare bones and starting over.”

Recently, I had the opportunity to do this very thing. In remodeling a mid-century ranch home, I had a very large 60’s add-on family room with ragged ceiling tiles, warped sheet paneled walls and indoor-outdoor carpet. It was not pretty!

The original house was built on pier and beam. The addition, however, was built on a slab, which created a step down into the room. There was an awkward small landing that separated the dining room from the drop off into the family room addition.

For whatever reason, a very long narrow window had been added to one wall. It made the room look like a garage. It is my thought that the original homeowner wanted privacy on that side of the house, but desired the light the window offered. It did accomplish that, but it was truly ugly.

“The very first thing I wanted to do in that room was to tear out that window. So, I did. The wall was filled in, and a lovely French door replaced the window.”

We added a small deck in the side yard as a little bonus resting space. What a difference that made. The transformation had begun!

The ceiling was huge in this 25 by 28-foot room. It was not tall, but overwhelmingly big. After studying the situation I decided that it needed to be broken up into smaller sections, but how.

I wanted beams to add some separate detail, but that wasn’t enough.

Sheetrock and texture just seemed too severe for that space. It needed texture. I decided to cover the ceiling with beadboard panels. After purchasing 30 sheets of beadboard, I started second guessing myself. Painted beadboard was going to be stark and overwhelming, too. That is when I got the bright idea to do a hand washed finish instead.

About 12 sheets into the process I was regretting that idea, but I pushed on to the finish line. It was worth the pain! The beadboard ceiling set between the stained beams transformed that massive boring ceiling into a warm, inviting, well-balanced area.

All of the paneled walls were replaced with new Sheetrock. We had a lot of narrow scraps of beadboard left over from the ceiling, so I decided to use them as wainscot around the room. It was installed horizontally, as the scrap paneling went that direction. When it was completed, we loved the look. Finding a good use for all of the leftover materials made me happy, too.

The carpet was hauled out, and ceramic plank floors were brought in. The landing was done in a slate mosaic tile, which created an interesting transition from hardwood in an adjoining room to the plank ceramic.

With these changes, I was able to create a warm, cozy family living space that will last for decades. It will never go out of style, and it will never feel uninviting. I was able to make this massive, bland space feel like home.

Now all I need is a family and lots of furniture to fill it. Some lucky folks will share a lot of memories in this revived mid-century home.