FOR THE LOVE OF DOG… 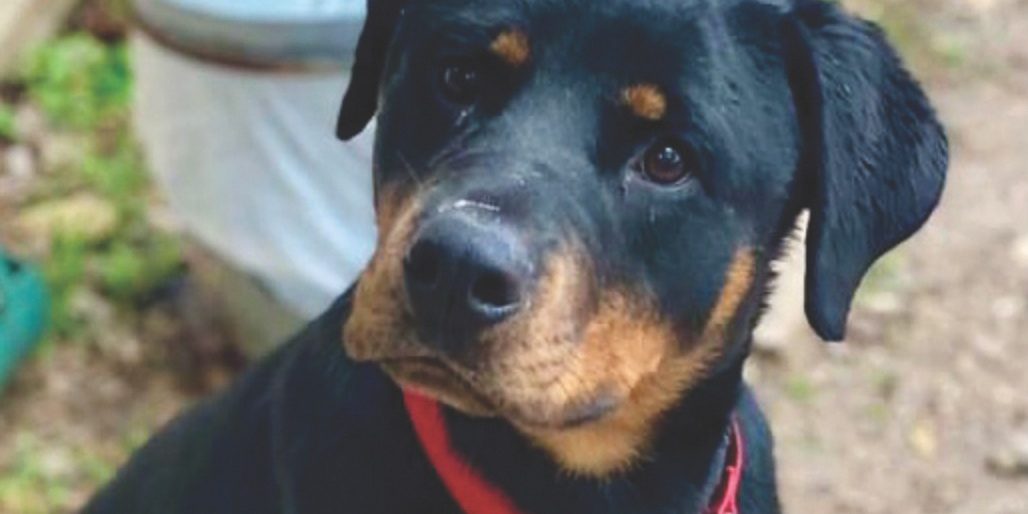 In 1998 we were living in a small rent house on Grand Avenue in Waxahachie when my husband Andrew saw a small Rottweiler puppy dodging traffic on our street .He swooped her up and brought her back to the Doves Nest, where I immediately took her in my arms. We ran ads and put up signs for found puppy, while holding our breath no one would claim her. We named her Maggie after a children’s book my mom wrote. She was our girl for 13 years.

Never in my wildest dreams would we own a Rottweiler. I thought those are the kind of dogs you see in junk yards, scary movies and guarding drug dealers. Little did I know at the time that Rottweiler’s make great family dogs? They are also incredibly smart, loyal and big babies. We fell in love with the breed.

When Maggie passed away I found myself searching rottie rescue sites and spotted a picture of a young female at a rescue in Austin. She had been brought there with a broken leg. Having been cared for and loved at the rescue for 7 months she was now ready for a new home.  We drove to Austin and adopted Elsa. For the next 10 years she was my shadow. Living in a loft above our business, Elsa would come downstairs with me every morning and work in my office. She must’ve been abused at a very early age because she was terrified of men in baseball caps with a low voice and carrying anything resembling a stick. She never forgot her abuse, but once she knew she could trust you she was all in. Losing her last year left a huge hole in our hearts.

In January I once again found myself looking on rescue sites.  Several weeks went by but I just wasn’t finding any pictures that spoke to me until one night a shelter in Missouri City, Texas posted a young female Rottweiler who was found on the streets of Houston. I showed the picture to my husband and after a few minutes he said with certainty, “That’s our girl”.

I reached out to the shelter. They told me there was a lot of interest in the dog and I needed to fill out an application. In the meantime, I drove to the shelter and fell in love with her immediately. They didn’t know anything about her past and she was terribly underweight, but healthy nonetheless.  The shelter would not do a same day adoption and asked us to wait until all the other interested parties had met her. I drove home praying. I sent the shelter pictures of Maggie & Elsa and shared with them our history of rescued rotties. I emailed, called and had the Austin rescue vouch we would make great parents. I’m sure I drove them crazy, but we finally got word they chose us. We drove back in a snow storm to pick her up, where she pranced proudly to the car with us laying her head in my lap all the way back home. We named her Gertie.

There is something very special about a rescue animal.  If you are looking to start or expand your family, please consider a rescue dog or cat; there are plenty of shelters that need your help. Every rescue animal understands they have been saved and will spend their life thanking you with unconditional love and devotion. What more does one need?  We can’t imagine our lives without a Rottweiler, especially an adopted one. I’m not always sure who rescues who, but we are glad when we find each other.